An upward economy and an increasing number of baby boomers retiring from their careers are breathing new life into the RV industry as more retirees are buying motorhomes for sale throughout the country. An article from The New York Times provided more details regarding this phenomenon:

The best estimates say 750,000 to one million retirees call R.V.s home, according to Kevin Broom, director of media relations for the Recreation Vehicle Industry Association. He said independent studies suggested their ranks were growing. Although the recession took a toll on sales of new R.V.s, the number of R.V. owners 55 and older increased 20 percent, to 3.6 million, from 2005 through 2011.

That is not surprising. “We are seeing a lot more people, 55, 57, 58, who got laid off and decided they couldn’t handle retirement,” said David Gorin, an industry consultant from McLean, Va. “We’re also seeing more people who can use technology to work from the road and those who have just decided, ‘Let’s enjoy life while we can.’ ” 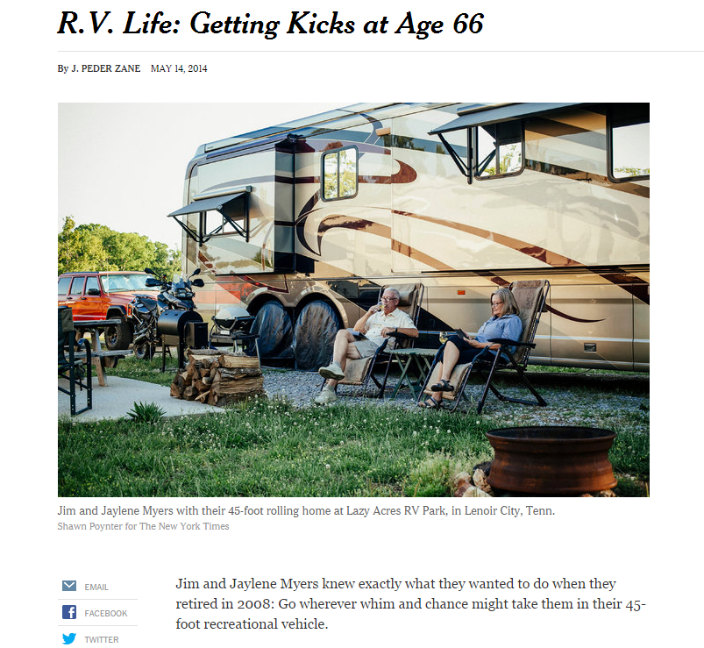 Baby boomers are those born between the years 1946 and 1964, and many are now beginning to settle down from their careers. Clearly, it doesn’t mean that they are going to go quietly into retirement: the number of RV owners aged 55 and above saw a 20% increase to 3.6 million from 2005 through 2011, a figure that has only risen in the following years. The numbers indicate that baby boomers are on the move, and that they are living in mobile homes while they’re at it.

The attraction of living life on the road is a multifaceted one. Contrary to popular myth, RV owners are usually active parts of mobile park communities in places where they stop over, providing each other with information, assistance, and a deep sense of camaraderie. For those in their later years, this becomes a meaningful way of cultivating social connections and remaining active during their newly-freed time.

The RV lifestyle is also a unique chance to live closer to nature, in contrast to the baby boomers’ formerly fast-paced lives. In addition, an RV presents limitless opportunities for exploration and discovering beautiful places, adventures that hectic work schedules do not permit.

For those in the Sandy, Oregon area, buying a well-maintained motorhome for sale from trustworthy dealerships such as Johnson RV can be the start of exploring the infinite attractions of the open road, beginning with local beauties such as Mt. Hood and the Sandy River Valley. As baby boomers are showing, the journey is definitely as important as the destination whatever age one may be.